Despite all the controversy over the allocation of anti-LGBTQ+ policies on working conditions, the World Cup has begun and has also arrived in FIFA 23. The ad hoc mode that arrived in the EA Sports football simulation is a minor disappointment, although it is in all in all a free expansion for owners of the game. Fans had so far praised the California company’s initiatives regarding the new cards introduced in FIFA Ultimate Team and the various “gifts” to celebrate the start of the World Cup.

That said, however, it is not the case to expect a complete experience such as that we received at the time of the standalone World Cup matches, especially those dedicated to the South African edition. With the expansion, FIFA 23 has added just two new stadiums for you to play in, albeit with the same level of care and sophistication found in the base title.

Partly due to Qatar’s less lively and colorful atmosphere, the “mood” is not particularly exciting: no samba as in Brazil or vuvuzela as in South Africa which, apart from the annoyance they caused listeners, are in any case a distinguishing feature goods. character trait. The commentators do what they can and add references to previous editions here and there, but otherwise there isn’t much different with the World Cup theme.

All this means there’s no real connection between the game and the current World Cup, although World Cup Live mode lets you play the matches as they’re celebrated in the real review.

No qualifications or calls —

Sure, the classic Tournament mode is back to play the event to your heart’s content, but the bad news here is that you can’t edit squads using your own summons. The World Cup qualifiers are also missing, so you can’t play them as an extra challenge or to add some longevity, or even try to shine a spotlight on a half-unknown country.

If nothing else, some unqualified countries (we know of one in particular…) have been added to the pool of selectable countries, probably so as not to exclude too large a portion of enthusiasts. There is also an online variant of the tournament, where you can play it against opponents from all over the world, but only about 1,000 players are currently logged in at any one time. This means that it is very unlikely that you will be able to play until the finals, given the very small number of players you can fight with. 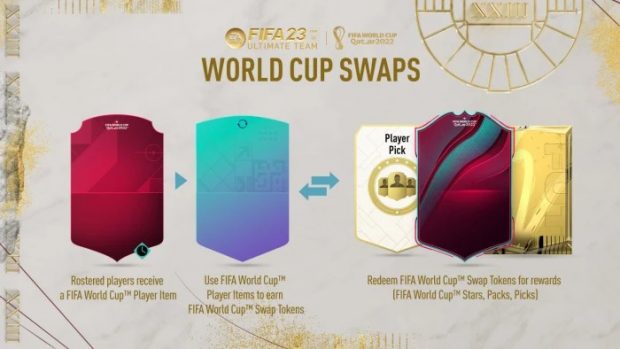 The biggest effort has undoubtedly been made on FUT, although the card-based mode doesn’t reserve much other than a series of special promotions. Other cards have been added, with the clear intention of encouraging spending among the mode’s most ardent enthusiasts who want to take home some (those rare) pieces. Just like in a Panini album, you can collect the stickers of the players participating in the World Cup, with the only exception that EA Sports will remove them from FIFA 23 on January 4.

However, the World Cup themed achievements are a nice touch, and the good news here is that cards purchased with World Cup tokens effectively remain in play with no expiration date. Tokens are available in abundance and there are many rewards to choose from, both of which contribute to increasing the replay value beyond expectations (without particularly impacting players’ wallets). 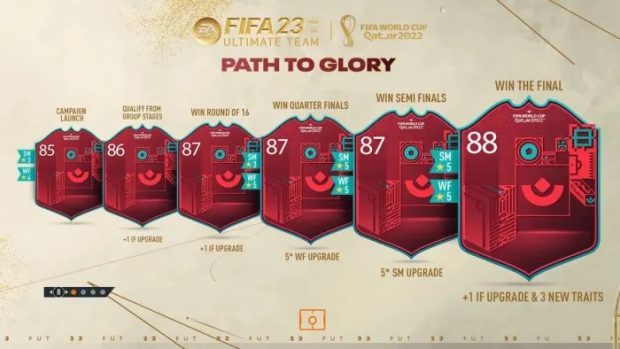 Path to Glory cards also level up as players display tournament progression for their national team. The round of 16 is worth a +1 IF upgrade, the semi-final a 5-star weak foot, the final 5-star Skill Moves, and finally winning the World Cup will attribute three attributes appropriate to the player’s role and an increase of one IF point on the total. FUT Moments themed around the league’s daily matches are also a nice perk and will be available throughout the tournament, even featuring some matches from the tournament’s history.

Basically, what’s left are these nice additions to FIFA Ultimate Team: if you’re not a player of this particular mode, or if you were expecting something more from the base title, there’s probably not much for you to try in this expansion theme.

Written by Alex Bugg and Paolo Sirio for GLHF

I have been working in eSports Chimp for almost 5 years now. I have written different types of articles but I mostly focus on gaming news. It has always been my dream to work in eSports Chimp and I am grateful that I am able to do so.

I grew up playing video games and it has always been one of my passions. When I was younger, I never thought that I would be able to make a career out of it. But now, I am able to write about games and share my passion with others through my work.

I believe that there is a lot of potential in the world of eSports and I am excited to see how it grows in the future.

Previous article
Overwatch 2: Tracer has a damage bug, but it will not be removed from the game
Next article
SpongeBob and Skyrim will be new skin themes in Fall Guys