Evil West, the review: not a simple clone of God of War

Evil West may seem, to an unwary or reductionist eye, like a low-budget God of War clone (the one from 2018). However, by scratching the surface and making it to the first hour, one discovers something that stands out very clearly. Sure, it’s played in third person and over the shoulder, and there’s a marker around the character to point him in the direction of the enemy’s next attack. Once you get past the most obvious equations, you’re left with a solid adventure with a satisfying combat system.

Jesse Rentier is a supernaturally empowered gunfighter on a mission to rid the American frontier of all manner of supernatural bestiality. A premise, and there’s honestly not much else you should know in terms of story. There are so many dark forces at work here, such as vampires, mutants, zombies and demons, but it really doesn’t matter – Jesse has a large electrified gauntlet that allows him to rip them apart using only his fists. And that’s great.

Jesse’s movements are heavy, with each step “responding” with a deep bass. Just like in God of War Ragnarok, you can press the lateral move button to dodge an attack or double-press it in quick succession for a throw. Jesse will almost constantly change the weapon he’s using in the middle of a combo because yes, punches are great and melee combat takes up a good portion of the game time, but a shotgun, sniper rifle, and classic western pistol are what really characterizes the paraphernalia in Evil West.

The sniper rifle can crush enemies from a distance and becomes especially useful when the title begins to highlight its weaknesses. The gun is obviously a good idea at close range, letting you hold down the trigger to empty the magazine in moments. The “boomstick”, for its part, pushes away waves of enemies and shatters or damages shields and any other defensive measures they might take to progress through the story.

It starts slowly, but then… —

The game starts at a slow pace, but once you learn the combos and how to finish off enemies as efficiently as possible, things pick up in no time. Hold down the melee button and you’ll throw an enemy, then fire your gun at them to keep them in the air. A forward dodge followed by a melee attack results in a superman punch, which can be upgraded for splash damage, punishing hordes of enemies. Holding down the melee button and moving forward on the D-pad combines this with a jump and punch to knock the victim to the ground. like walls of nails, to kill them instantly. Creative kills and finishers are rewarded with items to restore health, which means as long as you’re stylish, you don’t have to worry about going down. 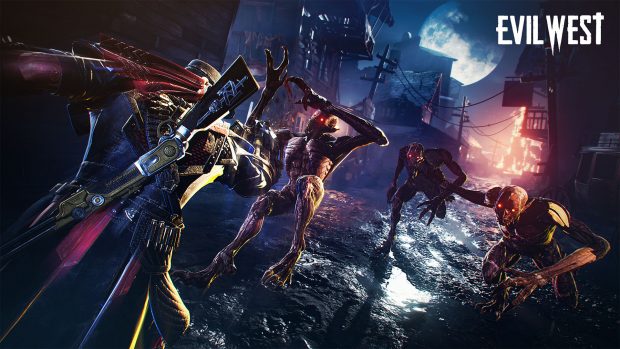 But Evil West is introducing new mechanics at a rapid pace, giving your fat gauntlet the ability to draw an electrified shield, parry and even teleport at enemies, or alternatively drag them towards you, to take it all in. follow with a barrage of electrified shots. Reasonably, you can end any fight just by dodging and using the shotgun to finish off your opponents – it’s powerful and enough to warrant the shooter style framing. However, you will soon receive more powerful and fun tools, and after all, the key to enjoying Evil West is to use all the tools at your disposal, sometimes in a single combo.

What’s good and what’s not –

However, the story is a bit bland. The supernatural American frontier is a fun setting to visit even years after Red Dead Redemption: Undead Nightmare or recent titles like Weird West and Hard West 2, but Evil West doesn’t really tell an interesting story in this setting. There are demons at work here and it’s pretty obvious, an evil little girl, some villain with a mustache…well, the usual. You shouldn’t play Evil West for the story, but for the gameplay. 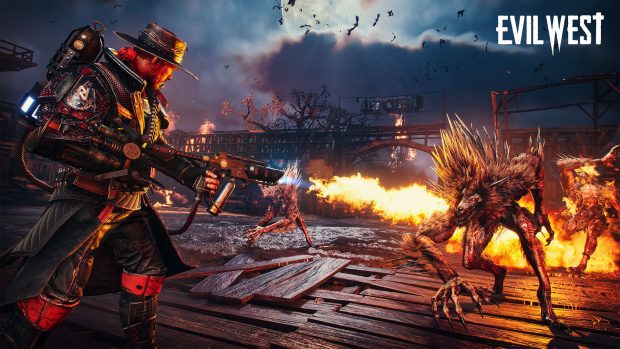 This is where the game really shines: it’s heavy and believable, but also arcadey and silly. Unlocking abilities that let you charge your fists with precise button presses, or fend off waves of enemies – all of which add up to something that looks ridiculous, yet feels so powerful and satisfying with every hit. Like we said, it’s easy to compare it to God of War and it’s easy to see why you would, but while Ragnarok manages to create a great cinematic experience with incredible actors, Evil West is content to give you literally beating demonic creatures until they explode. in a thousand pieces. And you can easily imagine how satisfying it is.

Evil West is at its best when demons explode, and at its worst when it tries to take its derived mythology seriously. Thanks to the ever-evolving arsenal, the combat manages to stay fresh, and overall it’s a surprisingly solid action-adventure to end the year with.

Written by Dave Aubrey for GLHF

I have been working in eSports Chimp for almost 5 years now. I have written different types of articles but I mostly focus on gaming news. It has always been my dream to work in eSports Chimp and I am grateful that I am able to do so.

I grew up playing video games and it has always been one of my passions. When I was younger, I never thought that I would be able to make a career out of it. But now, I am able to write about games and share my passion with others through my work.

I believe that there is a lot of potential in the world of eSports and I am excited to see how it grows in the future.

Previous article
Pokemon Scarlet and Violet, the tricks to conquer Paldea
Next article
Overwatch 2 managed to overtake GTA 5 in terms of views on Twitch, but lost to League of Legends