In an arena of more than 2000 square meters located in pavilion 20 of the Milan Games Week and with 600 seats in the stalls plus two grandstands, PG Esports has organized 3 days of competitions in which the best teams will compete for the most famous titles on the competitive world. scene: League of Legends, Rainbow Six Siege, Fortnite and Rocket League. 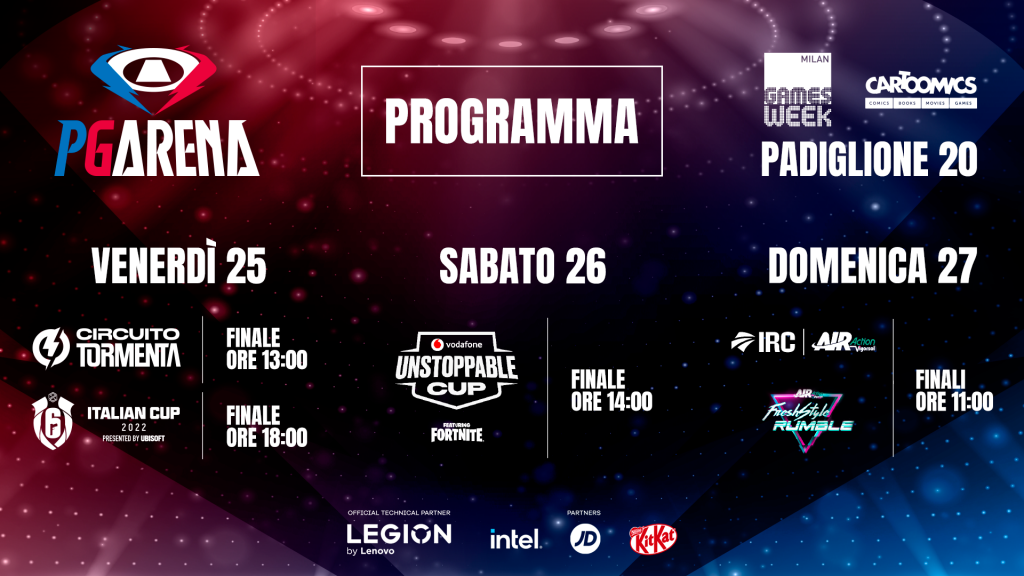 It starts on Friday 25 with the final of Storm circuit from League of Legends. After months of intense challenges, Away from Normal and Exeed will battle it out for the title in an exciting best of 5. All commented by the experts Carlotta “Charlie” De Simon and Simone “Tavernello” Martelli. The final will also be visible on the PG_Esports_LoL Twitch channel.

From 18 the first final of the Rainbow Six Siege Italian Cup, the first Italian cup of Ubisoft’s tactical shooter, in which the best teams from the PG Nationals challenged the teams that stood out during the Be Serious, the championship’s minor league. The best of 3 will consist of the Mkers and the 4real who, after two months of the tournament, got the better of their opponents. To kick off the match there will be a DJ set and Marco and Raffaele from Rainbow6ItaCom, the community reference point, and Mauro “JustRyuk” Barone, historical caster of the Rainbow Six Siege matches, will also take the stage. The final will also be visible on the Rainbow6IT Twitch channel.

On Saturday 26, it’s Vodafone’s turn Unstoppable cup, where the final stages of the competition will take place in the early afternoon, while there will be room for a free public play on the Home of the Unstoppable map in the morning. Open to the Fortnite community in single player mode with no build, the competition saw the most passionate players from the famed Epic Games Battle Royale compete in four qualifying days, but only the first 100 have a chance to win in a thrilling surrender of accounts. In the final phase, two exceptional casters will provide commentary, namely Xiuder and Pow3r, who will then participate in a meet and greet with the fans. The finals will also be broadcast on PG Eports and Xiuder channels.

Finally, on Sunday 27, there will be the play-offs and the grand final of the ninth edition of the Italian Rocket Championship, the Italian Rocket League. Four teams will compete in the playoffs: Reply Totem, Cagliari Esports, Webidoo Gaming and No Fear Gaming. These teams will battle it out in the best of 5 challenges for the final goal. The top two teams will get access to a best-of-7 final that will decide who will become the top Italian team of the Psyonix Studios title. At 18:30 it will be the turn of the final of the Fresh Style Rumble by Air Action Vigorsol in which Littlecat and Diazuma will compete, put to the test in an intense best of 3. The final of IRC and that of the FreshStyle Rumble by Air Action Vigorsol will also be visible on the Twitch channel ItalianRocketChampionship.

Previous article
Milan Games Week & Cartoomics 2022, the biggest edition ever
Next article
Vampire Survivors gets the 1.1.0 update with a new stage and character